Rebecca Vilkomerson is the executive director of Jewish Voice for Peace, where she has been a member since 2001. In 2010 she was named one of the “Forward 50,” a list of the most influential Jewish-American leaders released by the Forward, which also named her one of “14 Women to Watch” in 2014. 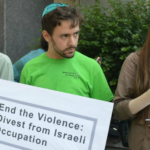 The Uses and Abuses of Antisemitism

Campaigns to silence criticism of Israel don’t protect Jews — they endanger them.