For more than a year, the Trump administration has attempted to carry out a brazen, undemocratic power grab. But it has nothing to do with the election.

Beneath the din of Trump’s lies about voter fraud and refusal to concede, his administration has engaged in a subtler — and likely far more consequential — effort to manipulate the electoral playing field to the Republican Party’s advantage. At its core is the pivotal (if mundane) once-a-decade task of using census data to reapportion seats in the US House of Representatives.

In a memorandum published on July 21, 2020 — a year after the Supreme Court struck down Trump’s effort to depress census participation by including a citizenship question on the questionnaire — the president claimed he had the authority to exclude undocumented immigrants from the census population counts used to allocate House seats.

Trump’s move, currently awaiting review before a Supreme Court whose ranks now include three of his appointees, would not only redistribute seats (and Electoral College votes) away from densely populated states, it would also likely result in the misallocation of federal resources during a historic pandemic and economic crisis.

If Trump and the GOP are successful in court — refashioning the “people’s house” to disadvantage electoral majorities and buttress their own power —  it will receive far less attention than the spectacle of the elections. Stealthy power grabs targeted at taken-for-granted democratic institutions typically do. And that, among other things, is what makes them so dangerous.

The “People’s House” Against the People?

In a country rife with counter-majoritarian political institutions, the House of Representatives, apportioned based on total state population, stands as a potential democratic counterweight. Yet that hasn’t stopped political coalitions facing electoral irrelevance from rewriting the rules to entrench their power.

Following the 1920 census, which portended a dramatic shift in power toward urban population centers like Chicago, Philadelphia, and Detroit, a legislative coalition of rural Democrats and Republicans simply blocked the process for an entire decade, locking in rural control of an increasingly urban America.

Members of the rural coalition were motivated by a raw desire to maintain power: historian Charles Eagles’s analysis of roll-call votes taken throughout the 1920s reveals that the greatest source of opposition came from members of congressional delegations likely to lose seats as a result of reapportionment.

Reapportionment foes also drew strength from a set of nativist arguments. As William Vaile, a GOP congressman from Colorado, complained, the post-1920 apportionment legislation would increase the weight of “districts of largely foreign make-up” such that “[a]lien elements will control the election of their Congressmen.”

Those who represented recently arrived immigrants saw the power play for what it was. Meyer Jacobstein, a member of New York’s congressional delegation, argued that “[w]henever reapportionment is faced with a shifting population, you get injustice” because “people who have authority never willingly relinquish it.”

The 1920 reapportionment fiasco ended in an awkward, brokered compromise. As stipulated in a 1929 law called the Permanent Apportionment Act, House seats would be automatically reapportioned after every decennial census. In exchange, reapportionment opponents received a concession: congressional districts were no longer required to be compact, contiguous, and roughly equal in population — mandates that had been in nearly every apportionment bill since 1842. Abandoning these criteria created a new opportunity for rural interests in the form of legislative malapportionment.

For the next thirty years, rurally dominated (and also malapportioned) state legislatures designed congressional districts to cabin the power of population centers. The population of Georgia’s Fifth Congressional District following the 1960 Census was 823,680; its Ninth Congressional District contained only 272,154 people. This persisted until 1964, when the Supreme Court essentially reinstated the redistricting criteria Congress had abandoned in 1929.

While the case put an end to intrastate malapportionment, malapportionment among states remains a problem in the House, largely because the number of representatives has not grown since 1910, when Congress fixed its size at 435 members. As Jeffrey Ladewig and Matthew Jasinski point out, this sets the House apart from lower chambers in peer countries (see below), whose seats tend to expand in proportion to their population. 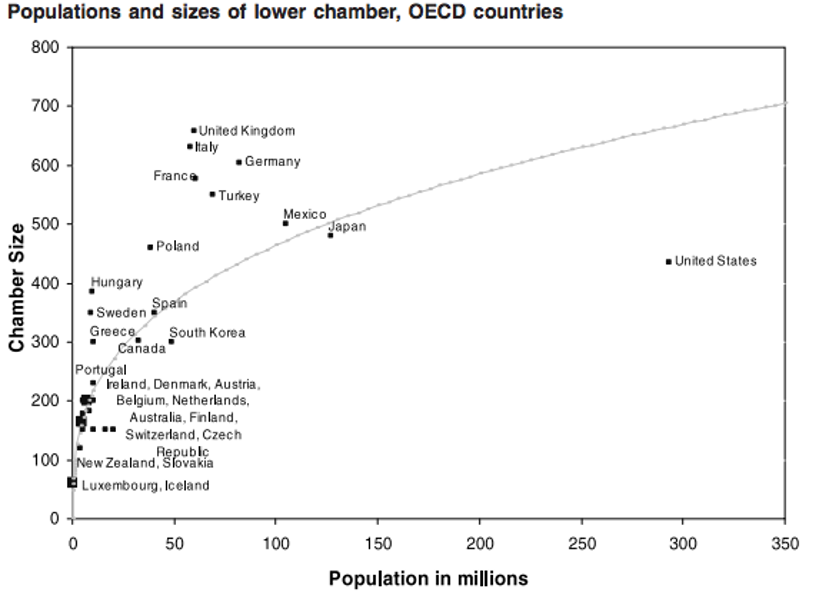 After the 2000 Census, the interstate population discrepancy between two House districts ran as high as 410,012, twenty-one times greater than the intrastate malapportionment the Supreme Court ruled unconstitutional in precedents such as White v. Weiser (1973).

And the problem runs deeper still.

By the late 1970s, only a decade after the legislative reapportionment revolution, nativist organizations began developing a renewed theory of apportionment. Organizations like the Federation for American Immigration Reform (FAIR) and its legal arm, the Immigration Reform Law Institute (IRLI), argued that the “one person, one vote” standard articulated in the Supreme Court’s Wesberry v. Sanders decision required excluding “illegal aliens” from population figures used in congressional and state-level redistricting.

This nativist argument is at the heart of the Trump administration’s efforts to exclude undocumented immigrants from congressional apportionment counts for the first time in American history.

Despite repeated dismissals of apportionment cases, FAIR’s nativist arguments continued to percolate through the courts between the 1980s and 2000s. FAIR-style claims re-emerged most prominently in Evenwel v. Abbott (2016), where two Texans contended that including undocumented immigrants in state redistricting counts violated the 14th Amendment’s Equal Protection Clause because it “diluted” the power of their votes.

The nativist argument is at the heart of the Trump administration’s efforts to exclude undocumented immigrants from congressional apportionment counts for the first time in American history.

The Supreme Court unanimously agreed that it was constitutional for Texas to use total population figures in redistricting, but left the constitutionality of nativist reapportionment schemes unresolved. Justice Clarence Thomas went even further, announcing in a concurring opinion that there is no constitutional basis for the “one-person, one-vote” principle.

The table of contents in IRLI’s amicus brief in Trump v. New York spells it out in two blunt sentences:

B. “Illegal Aliens Are Not Members Of Our National Political Community.”

Supplementing the nativist logic is an emboldened theory of the imperial executive branch, which holds that the president may, via memo, evade statutory and constitutional requirements that apportionment be based on the tabulation of “total population” of each state.

While neither the administration nor its supporters can cite a single historical example to support their argument that the president can fix House apportionment on a whim, the ghost of Evenwel haunts the briefs. And at any rate, a court stacked with Trump appointees will likely be more open to alternative theories of reapportionment than the one that decided Evenwel.

The material effects of making undocumented immigrants vanish in the congressional count are hard to overstate. States with larger populations of undocumented immigrants would lose as much as 6 percent of their apportionment populations, while more homogenous states like Montana, West Virginia, and Maine would be safe. Texas would lose a congressional seat. California and New Jersey might too, and Arizona, Florida, New York, and Illinois would also be in danger.

Those losses would be mirrored in the Electoral College, further biasing presidential contests. And a fall-off in representation would mean a corresponding decline in federal dollars. Typically, an extra congressional seat translates to as much as $100 per capita in additional federal funding. As George Washington University researcher Andrew Reamer notes, because apportionment numbers are used as official tabulations in statutory formulas, the effects on funding could be far more dramatic: 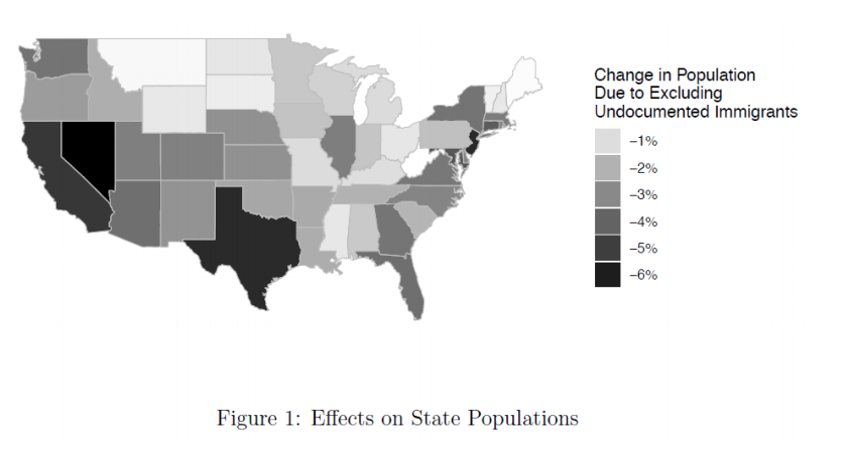 Equally disturbing is what it would mean to open the door to the idea that Congress (or state legislatures) can redistrict on the basis of a principle other than total population. If undocumented immigrants can be excluded, there would be little stopping right-wing legal theorists from articulating other redistricting criteria. The result would make current partisan gerrymanders in states like Wisconsin look quaint by comparison.

The future of the 2020 apportionment controversy is not clear. While the Supreme Court will hear oral arguments on the case later this month, the Census Bureau has indicated that it may not be able to comply with the Trump memorandum by the apportionment deadline of December 31.

Even if Trump does send “his” numbers to Congress, the House of Representatives could still refuse to accept them, which would likely set off a chain reaction of litigation that could take some time to resolve.

But whatever the outcome, this episode reveals that Trump’s refusal to concede the election, however audacious, is consistent with a far more potent, and more powerful, strand of counter-majoritarianism with deep historical roots in the Republican Party. It is a strategy whose success derives in part from being unspectacular, buried in briefs, barely perceptible even to seasoned political observers.

And it is the kind of ideology that cannot be fought with defensive legal argumentation alone. It requires a good offense: a vision for reconstructing American political institutions that gives the majority — the most important number in a democracy — a voice.