Earlier this year, Joe Biden described his military budget for Fiscal Year 2023 as “among the largest investments in our national security in history.” But what it will actually deliver is a historic redistribution of wealth to the business class: more than half of the annual US military budget goes to for-profit companies. So when the House and Senate vote later this month on the Fiscal Year 2023 National Defense Authorization Act — which contains $858 billion in military spending, thanks to an agreement reached this week — the two chambers will effectively be deciding whether to lavish well over $400 billion on private contractors.

The contrast with ordinary workers could hardly be starker. At the same time weapons companies propel Pentagon spending ever-higher — putting even Cold War–era military budgets to shame — millions of people in the United States are struggling with a cost-of-living crisis exacerbated by inflation. Nearly two-thirds of Americans are living paycheck to paycheck. A recent study by the Federal Reserve Bank of Dallas found that a majority of employed workers’ real wages haven’t kept up with inflation over the past year.

And how has the Biden administration responded? By dropping pandemic relief in a bid to curb rising prices. Ending pandemic aid has simply deepened economic precarity for millions of people. According to an October Census Bureau survey, 41 percent of US households say it’s very or somewhat difficult to pay their typical household expenses. That number was 26.2 percent in April 2021, right after the third round of stimulus payments. 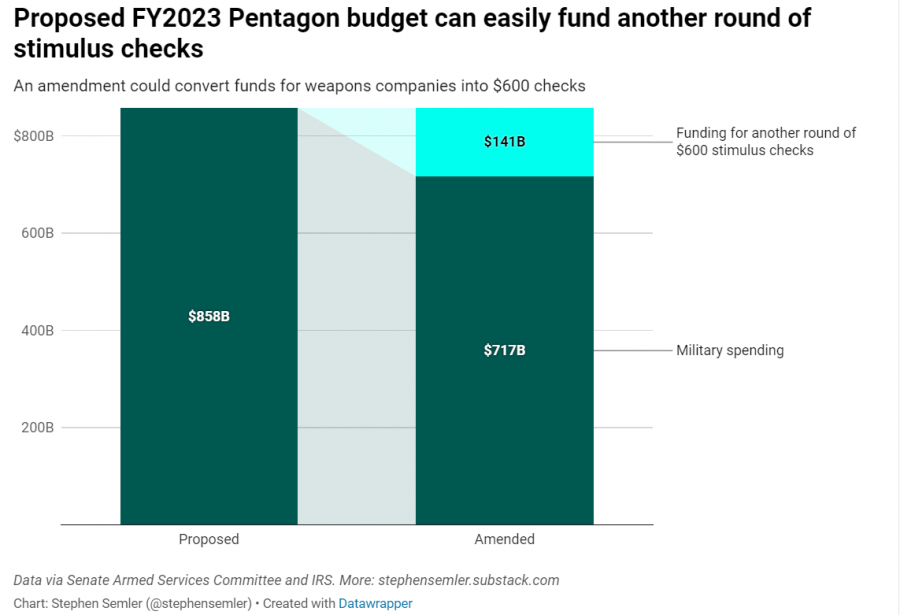 Nothing is stopping Biden or his congressional allies from reviving the stimulus checks (or, for that matter, any of the social programs that were stripped out of his Build Back Better plan, such as the child tax credit or paid family and medical leave). For instance, here’s one modest proposal to convert a chunk of Fiscal Year 2023 military spending into $600 stimulus checks: First, via amendment, cut $141 billion — the amount spent on the $600 stimulus checks, per IRS data — from the amount authorized for the Pentagon for Fiscal Year 2023. (Reductions would not apply to the accounts for military personnel and the Defense Health Program.) Then, send the $141 billion to the Treasury to repeat the second round of stimulus payments. Simple as that.

The problem is that Biden has soured on human security spending. While his first budget request featured a sweeping domestic agenda (in addition to a massive military budget), ambitious social spending is now being displaced by an emphasis on deficit reduction and an even larger Pentagon budget. Just recently, the White House threw cold water on the prospect of a fourth stimulus payment, citing the cost.

The COVID-19 pandemic was supposed to impart the lesson that security isn’t bought through a gargantuan Pentagon budget, but instead through social spending that improves safety and well-being. Future budgets, it seemed, might finally prioritize funding pro-worker programs rather than weapons.

The policy platform Biden and mainstream Democrats are pushing — austerity for social programs, a blank check for the military — is doing exactly the opposite.