As Republicans continue to portray student debt relief as a giveaway to affluent Democrats, new Federal Reserve data show the opposite: the relief would disproportionately help low- and middle-income communities and especially benefit many Republican states whose GOP officials have been insisting debt forgiveness “will unfairly burden working class families,” as Missouri’s Republican attorney general put it.

On Thursday, six Republican-led states filed a lawsuit to try to block the Biden administration’s plan to forgive up to $20,000 of borrowers’ federal student debt. The lawsuit comes after one federal student debt servicer, Maximus, has poured more than $1 million into Republican state campaigns in the last three years.

The new Federal Reserve study shows that five of the six Republican states filing the lawsuit would have among the largest shares of their adult populations benefiting from the program.

Overall, the Fed analysis finds that nearly three-quarters of the loan forgiveness will go to those living in areas where the median household income is below $83,000 a year.

“The average forgiveness amount makes up nearly two-thirds of the average balance in the lowest income areas,” the researchers found, adding that borrowers in lower- and middle-income neighborhoods “are more likely to have their loans completely forgiven by the plan.” 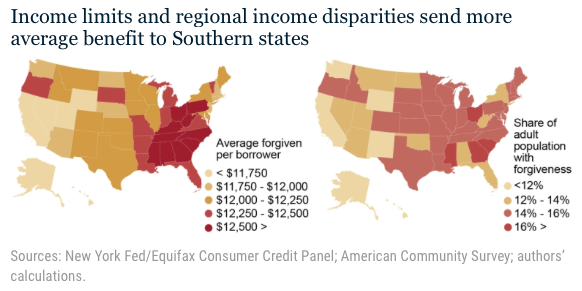 It’s the same story when comparing shares of the adult population that would receive debt relief: seventeen out of the thirty-two states with the highest share are Republican, and three of the four that top the list are the GOP strongholds of Alabama, South Carolina, and Ohio.