When critiquing the designs of the various programs in the Build Back Better legislation, I have tried to avoid simply saying that the programs should be bigger and more generous and instead focus on technical design details — benefit cliffs, activity tests, work history requirements, administrative burdens, and state participation, among others — that are bad regardless of the underlying generosity of the overall program.

I have done this not because I think inadequacy is an illegitimate critique but mainly because it’s an obvious critique that can be levied against most proposals without limit and because it’s easy for defenders of the legislation to say that making the program bigger and more generous is simply outside the realm of possibility, which is constrained by certain politically dictated budget constraints.

In this post, I am going to briefly dip into an inadequacy critique, but only in order to make a broader point about why universal benefits make sense as a purely distributive matter. I think this will be a novel point to most people who follow these debates because the universality versus means-testing fight has mostly settled into a few familiar arguments that aren’t actually the best analyses on the subject.

So let’s dive in.

Childcare Subsidies for the Rich

Rather than provide free childcare to all families, the Democratic childcare plan provides sliding-scale subsidies based on family income. Families with high incomes wind up receiving no childcare subsidies, either because they are over a specific income threshold that makes them ineligible or because their required co-payment is enough to cover the entire unsubsidized cost of childcare.

On first glance, making rich parents pay large sums of money toward childcare rather than providing it to them for free seems to make a lot of sense. It appears to save the government money and even reduces inequality in society. But a more sophisticated analysis reveals that this entire line of reasoning is simply confused.

To see why, let’s start by looking at the distribution of family income in the United States, according to the 2019 Current Population Survey (CPS). 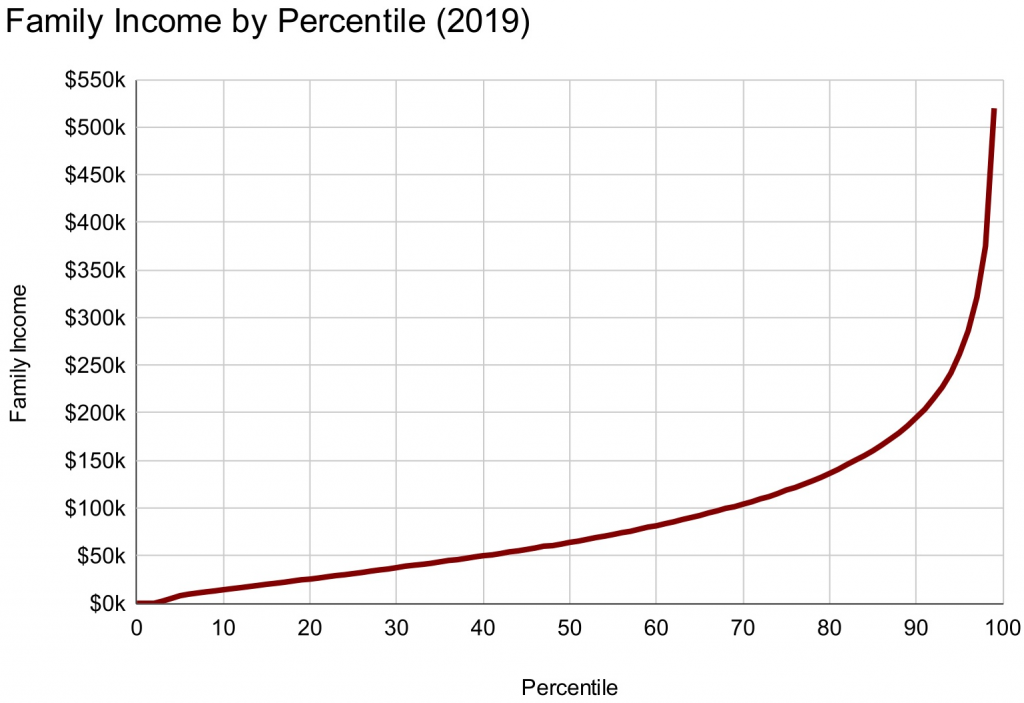 As you can see in the above graph, the cutoff for the top 10 percent of families is right around $200,000. This nice round number makes for some neat analysis. So, for the purposes of this post, let’s define the “rich” as families with incomes at or above $200,000.

In the 2019 Annual Social and Economic Supplement of the CPS, there are 12.8 million rich families, so defined. Those families contain 41.1 million people, including 1.4 million kids below the age of three. Their combined income was $4.3 trillion.

Is it a good idea to make rich families contribute $36 billion toward the childcare system? Absolutely. In fact, they should be made to contribute much more than that.

Is it a good idea to drop this $36 billion charge only on rich families that currently have children below the age of three? Absolutely not.

If you use a childcare user fee to dump the $36 billion childcare contribution only onto rich families with kids below the age of three, you end up charging those families an average of $31,019 (some families have multiple young kids), which is equal to 9.26 percent of this group’s income.

If, instead, you impose a childcare tax to spread the $36 billion childcare contribution across all rich families, you charge those families an average of $2,797, which is equal to 0.83 percent of rich people’s income.

Notice that in both scenarios, the rich — defined as families with incomes at or above $200,000 — are paying the exact same amount: $36 billion. What differs is not how much the rich contribute but rather how that contribution is distributed among the rich.

Dispersing the costs, rather than concentrating them, has a lot of advantages.

First, it’s simply less financially burdensome. A tax equal to 0.83 percent of income is massively lower than a fee equal to 9.26 percent of income, even though both raise the same amount of money. This is just the basic wisdom of broadening the base and lowering the rate, something liberal moderates seem to understand in every other context except this one.

Second, it creates horizontal equality between similar families with different numbers of young children. Imagine two married couples that both have $200,000 of income. These couples are identical except that one has two young kids and the other has none. In the world of means-tested childcare user fees, the couple with the kids pays $50,000 toward childcare, leaving them with $150,000 of income after childcare fees versus the other family’s $200,000. In the world of universal free childcare funded by the childcare tax, both families end up paying $2,797 toward the childcare tax and thus both wind up with $197,203 after the tax.

Once you understand all of this, it becomes clear that the universalists are simply right about how to design these kinds of social benefits.

The social democrats are not just ideologically different than the liberal means testers. And they are not just buying votes with universal designs. More than all of that, they are just flatly correct on the technocratic merits. There is no technocratic or egalitarian case for means-testing a benefit like this. And people who say otherwise are mostly just victims of a special kind of brain fog that makes them incapable of looking through accounting conventions to see what is really going on.