Comparing incomes across countries poses certain difficulties: incomes are paid in different currencies, products have different prices, tax levels are different, and benefit levels are different. Many years ago, economists came up with a decent-enough way to cut through most of these problems: figure out the prices in local currency amounts for a given consumption basket and then compare those prices across countries to determine how much a given unit of currency is worth relative to the US dollar.

This is called Purchasing Power Parity (PPP). And it allows you to say that, e.g., 1 US dollar is equal to 7.985071 Danish kroner. With this knowledge in hand, it becomes possible to see, e.g., how Danish GDP stacks up against US GDP or how the median Danish income stacks up against the median US income.

In 2017, the last year the Organization for Economic Cooperation and Development (OECD) has data on the subject, the median disposable equivalized PPP-adjusted cash income in Denmark was $30,739. The same number in the United States was $35,600.

This figure is the best one we have from the OECD, but it suffers from one very big flaw: it subtracts the taxes people pay from their income, but does not count any of the noncash benefits they receive toward their income. This means that the taxes the median Dane pays toward public health insurance, child care subsidies, and free college are deducted from their income, but the value of these benefits are not then added back.

It’s hard to say exactly, but based on the LIS microdata that I worked on many years ago and these current OECD statistics, it’s pretty clear that the bottom 60 percent or so of Danes have a higher total income (when including in-kind benefits) than the bottom 60 percent of Americans. Once you get over that line, the United States pulls ahead of Denmark, at first modestly, but then enormously as you approach the top of the distribution.

This may be a boring way to approach this question, but I assure you it beats certain other approaches to it. 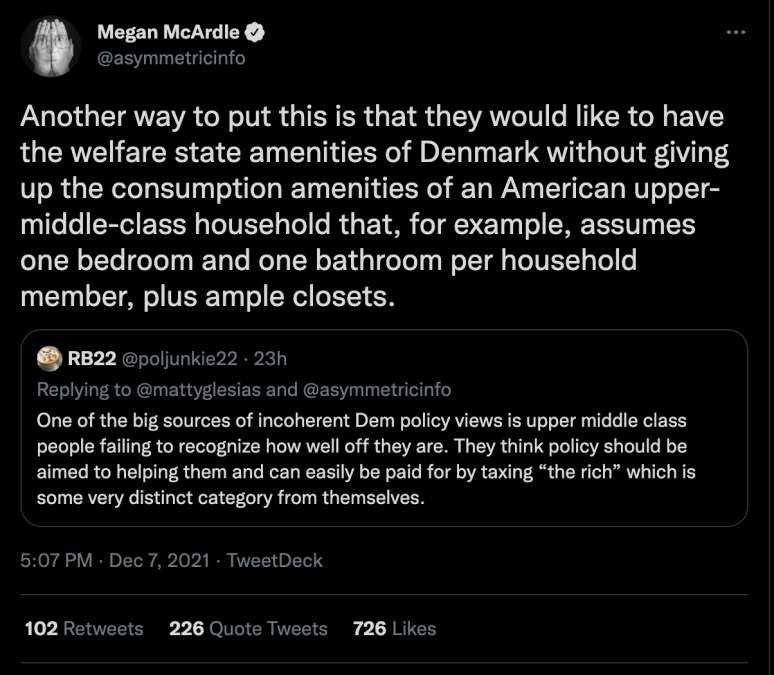 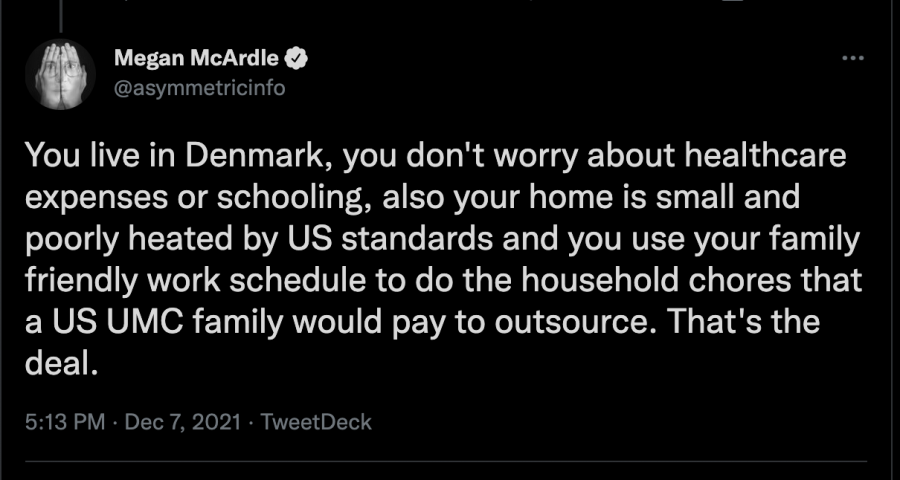 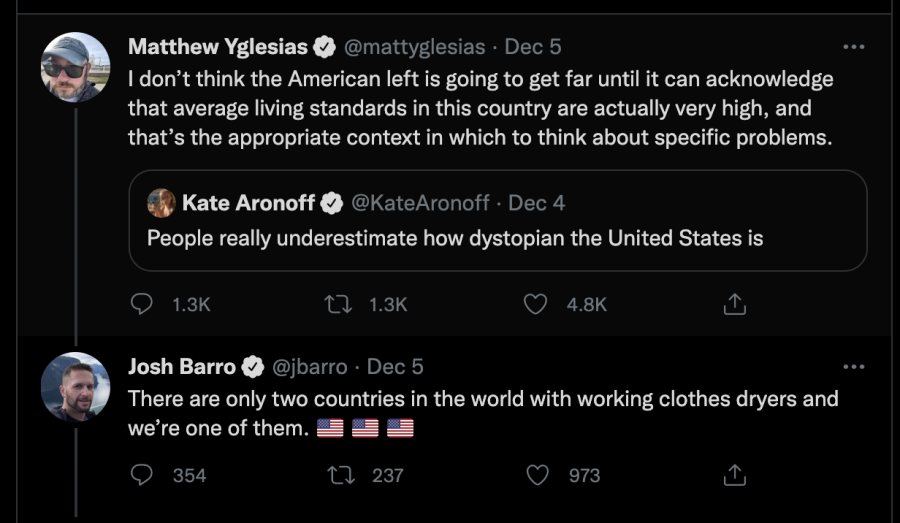 Elsewhere in this and adjacent threads, you see people talking about how Danes or other Europeans often don’t use various American appliances or consume fewer quantities of certain other consumption items.

The obvious problem with this analytical approach is that there are many reasons why someone might have a differently sized house, different appliances, and a different temperature on their thermostat that are not related to their general level of affluence. This is why we don’t try to compare different places by focusing on the quantities of one or a few specific consumption items, but instead focus on their incomes as compared to the prices of the consumption basket.

Danes clearly have enough income to buy dryers. They only cost a few hundred dollars and last ten years. Remember, this country’s PPP-adjusted per capita GDP is nearly identical to ours. If you want to figure out why they may not have them despite their clearly documented affluence, ask yourself why do Americans not have Japanese-style toilets despite their affluence? Why do we not have French bidets?

Judging by the toilet situation, we must be a pretty poor country. Or maybe it’s just that different societies develop different consumption habits over time and that picking on any given one of them is not terribly illuminating when it comes to figuring out their overall level of income and purchasing power and that instead you should use a more comprehensive measure.

Megan McArdle’s second tweet is particularly amusing because it begins by complaining that Danes have smaller homes on average, but then pivots to saying that the 421 hours of extra leisure time that Danish workers have each year should be disregarded because they have to use it to clean their houses instead of hiring maids. If only there was a way to work fewer hours and spend less time cleaning your house, perhaps by having a smaller house…like Danes have?

Poorly heated homes is a new one to me. Denmark is known for its extensive district heating systems. Maybe a country that is further north than Edmonton is just more comfortable with colder indoor temperatures and is not secretly poorer than the statistics suggest.

Don’t get me wrong. If people want to poke fun at the consumption patterns of other countries or even other regions of our own country, that can be good fun. Europeans seem to have a fun time with American chocolate, cheese, and beer. So by all means have a fun time with their bland food or small fridges. But in doing so, it’s best not to talk yourself into thinking that consumption patterns that differ from your own indicate a lack of prosperity.

When it comes to the “upper middle class” in America, which we might define as those who are significantly above the point where US income exceeds Danish income in the overall income distribution (say seventy-fifth percentile and thereabouts), the comparative question would have to focus on whether other considerations might outweigh lower incomes.

The universal welfare state really does provide benefits to everyone even those who are not net beneficiaries of redistribution. For those people, the main benefits of the welfare state are that it smooths out lifetime incomes and protects you from steep income drops.

Every time one of those “$200,000 is not a lot of money” articles drops, if you look closely at it, what you’ll almost always find is a detailed budget of someone who is currently shouldering a lot of expenses or savings that would be smoothed out by a tax-funded welfare state in other countries. So the budgets will usually be dealing with one or two childcare bills while also putting significant savings towards 401k retirement accounts and 529 college savings accounts.

At some point these costs will level out for this person: the kids will move on to K-12 and the 401k and 529 will be well-capitalized. At that point, they will be rolling in big-time cash. But at that moment, they seem to opaquely be grasping that a system with higher taxes, childcare subsidies, more generous old-age pensions, and free college would result in them having more money to spend at that point in their life, which means they are opaquely grasping that the smoothing function of the welfare state has a lot of value even for those with higher incomes.

The higher amount of leisure time might also factor in depending on your own personal preferences. Being able to take off an entire month in the summer and have more vacation and holidays in general is worth a lot to some people, which is why countries like Denmark have implemented these policies. Despite what McArdle says, it isn’t actually the case that all of this extra free time is spent cleaning.

Beyond that, there are of course various indirect quality-of-life aspects of an egalitarian society. There is much less crime, homelessness, “blight,” and things of that nature. Upper-middle-class people can often insulate themselves from that stuff in highly unequal societies, but not entirely, and the amount of time and money spent on insulating oneself from the consequences of inegalitarianism can also be a bit of a drag. Finally, you might even just care that other people in your society have good lives for less self-serving reasons.