I woke up on November 3 to a cheerful email from Democratic Socialists of America (DSA). The headline exclaimed, “Tuesday’s election shows that Socialism can win anywhere!”

Wow, this longtime DSA member briefly thought, maybe I was wrong, I guess India Walton pulled it off in Buffalo and will become the first socialist mayor of a large US city in decades. Instead, the promising candidate was crushed. And despite their herculean efforts, DSA’s deep bench of candidates in super-blue Somerville, Massachusetts proved unable to win a majority on the city council, where tripping over yourself to prove your leftist bona fides is a mainstream electoral strategy.

What’s more, socialists hardly faced the toughest electoral odds in 2021. Though over twenty DSA candidates were elected or reelected, only a handful competed outside of deep-blue states, and most of those ran in liberal enclaves like Orange County, North Carolina, and Minneapolis, Minnesota. To be fair, mainstream Democrats also suffered major defeats, from losing the Virginia governor’s race to seeing the president of the New Jersey State Senate fall to a Republican neophyte whose campaign war chest barely cleared four figures.

Nonetheless, a more fitting progressive headline for the 2021 election would be: “Tuesday’s election shows, again, that socialism can sometimes win in heavily Democratic areas.” We’re still a long way away from the political revolution.

Last week’s results are very much in line with what we saw in 2020 congressional races: Of the over forty challengers running for seats in the House or Senate endorsed by a range of progressive organizations from DSA to Indivisible, only seven prevailed, and a mere two were running in competitive districts: Democrats Christy Smith of California’s Twenty-Fifth Congressional District and Senator Ben Ray Luján of New Mexico.

Without a doubt, progressives have made real electoral strides in recent years, with small but meaningful socialist blocs emerging from the Chicago City Council and the New York State Assembly all the way to the US Congress. This is no minor achievement, given many previous decades in the political wilderness. Yet it is becoming increasingly clear that the tried-and-true method of picking off centrist Democrats in deep-blue districts is reaching its strategic limits.

The reality is that passing any big-ticket items on even the immediate democratic socialist agenda — if possible at all — will require a major pivot in progressive electoral strategy. The recent depressing spectacle around President Joe Biden’s Build Back Better Plan, held hostage by two Senate Democrats who are thoroughly unimpressed by threats from the Left, starkly illustrates this fact. If progressives had a candidate who could have not only defeated Kyrsten Sinema in the 2018 Democratic primaries but also appealed broadly to Arizona voters, we might not be in this mess. Until we learn how to compete effectively outside traditional Democratic strongholds, our political leverage will remain sharply limited at the local, state, and national levels.

But now comes the inevitable million-dollar question: How? Beyond rare cases like senator Sherrod Brown (Democrat from Ohio) and congressman Matthew Cartwright (Democrat from Pennsylvania), congressional progressive candidates (never mind socialists) have shown little capacity to win in purple, let alone red districts. What, if anything, can progressives do to improve their odds in these races?

Figuring out what kinds of left-wing candidates are most likely to succeed (or at least do better) in the difficult places required to build durable coalitions for change is harder than you might think. On the most basic level, only a smattering of progressive Democrats who have run serious campaigns in those competitive districts, and a slew of differences between candidates, races, and electorates in the few cases where they have run has plagued any statistical analysis trying to tease out which specific types of candidates perform best.

To better understand these issues, Jacobin recently teamed up with the polling firm YouGov and the newly formed Center for Working-Class Politics to field a survey of working-class potential Democratic voters in swing states. (We covered a large swath of voters, but for reasons we describe in the report, we did not poll respondents who self-identified as strong Republicans.)

In the survey, we presented pairs of hypothetical candidate profiles to two thousand of these people — assigning each candidate distinct demographic characteristics and messaging styles — and asked them to choose which of the two candidates they preferred. This allowed us to test the impact of a wide range of demographic characteristics and messaging styles and how they were received by different groups within the working class.

The results, which you can read in detail here, provide a treasure trove of insights for progressives, some of which provide strong empirical support for views many of us already felt intuitively, while others upset common assumptions about progressive electoral strategy.

On the one hand, we find that candidates are most likely to succeed when they focus primarily (but by no means exclusively) on bread-and-butter economic issues that affect everyone. For instance, candidates who stated their day-one priority was the economy, jobs, or health care performed significantly better than candidates who stated their day-one priority was racial justice or immigration. This was especially true among parts of the working class where progressives traditionally struggle, such as rural/small-town voters and swing voters.

Crucially, however, we also find that campaigning on issues like racial justice is not a liability among potential Democratic working-class voters. Indeed, candidates who included “end systemic racism” as one of their key campaign issues were viewed much more favorably than those who avoided an explicit mention of racial justice (candidates who campaigned on “equal rights for all”) or implicitly opposed it (candidates who campaigned on “protect our law enforcement”).

Digging a bit deeper, our results further revealed that candidates who included “end systemic racism” among their key issues while making jobs their top priority were popular, even among swing voters, who supported such candidates 54 percent of the time. By contrast, swing voters supported candidates who campaigned on ending systemic racism but instead made racial justice their top priority only 44 percent of the time.

The upshot is that progressive measures to combat racism are popular in general among working-class voters but particularly when paired with a primary focus on bread-and-butter issues. There is no need for progressives to compromise their values, but messaging matters. 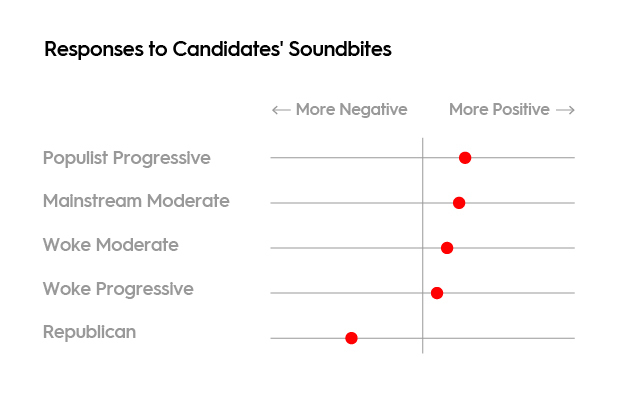 On a similar note, candidates were most successful when they couched their appeals in simple, plainspoken terms that avoided insider, activist-inspired language. In addition, candidates who used a combative, populist tone in campaign messaging (similar to a certain senator with amazing knitted gloves) slightly outperformed candidates offering more conciliatory, reach-across-the-aisle, Biden-style messaging – and significantly outperformed candidates who used activist language. The plainspoken, populist messaging was particularly effective among swing voters, for whom Republican messaging was more popular than virtually all Democratic messaging, with the exception of “Populist Progressive” messaging. 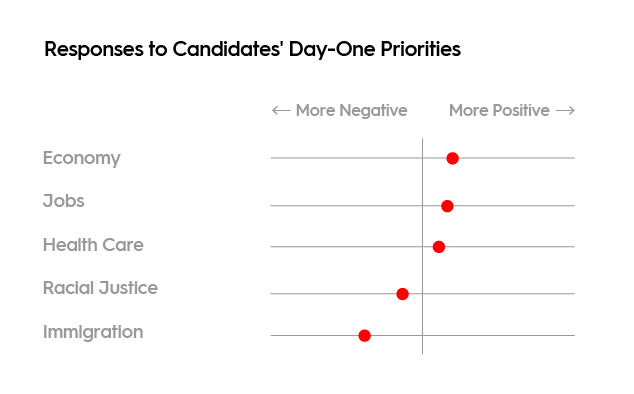 On the other hand, however, our results offer serious notes of caution to progressives on several fronts. First, contrary to Bernie Sanders and many of my fellow Jacobin writers during the 2020 Democratic primaries, we found that providing low-frequency voters with a bold progressive alternative did little to entice them, and that nonvoters were no more progressive, and in some important respects more conservative, than voters. A lack of meaningful progressive alternatives is simply not keeping potential working-class voters from the polls.

Finally, in contrast to surveys oft-cited on the Left indicating that voters are clamoring for a third-party, we found that working-class voters are just not that fed up with the Democratic Party: Running as an independent on the Democratic ballot line (as opposed to running as a Democrat) made no difference in respondents’ views of progressive candidates.

Of course, this is just one survey, and, though we made every effort to present candidate profiles that mimicked real-world candidates as closely as possible, there are many reasons why things could look different in real elections. Also, the nature of our study meant we had to limit the range of policies, issues. and types of messaging to a manageable number, meaning that we were not able to explore, for instance, the impact of climate change messaging or messaging around gender rights.

That said, our study provides a strong indication of where potentially winnable working-class voters stand. While campaign rhetoric and candidate demographics are only two of many factors that determine election outcomes (and far from the most important), they are among the few we can actually affect. If progressives hope to reach beyond the low-hanging fruit to challenge the Sinemas and even one day the Joe Manchins of the world, getting these right is essential.