Over the past few weeks, every time the onrush of inflation scare stories seemed to reach a crescendo, I would dial up a certain page of the Gallup website — the same page every time — just to reassure myself my memory wasn’t playing tricks on me.

The page I kept visiting was the one where Gallup reports the public’s answers to the following question, which the organization has been asking on a regular basis for more than seventy years: “What do you think is the most important problem facing this country today?”

As of yesterday, according to this “Most Important Problem” page, the share of respondents who felt that “High cost of living/Inflation” was the country’s most important problem was as follows:

Today, Gallup released an update for the month of October.

After months of alarmist media coverage and a Republican midterm campaign whose ad buys and prewritten talking points have made inflation the thematic centerpiece of the anti-Democrat message, the share of Gallup respondents citing inflation as the country’s most important problem has jumped — to 5 percent.

Let’s put this in some historical perspective. 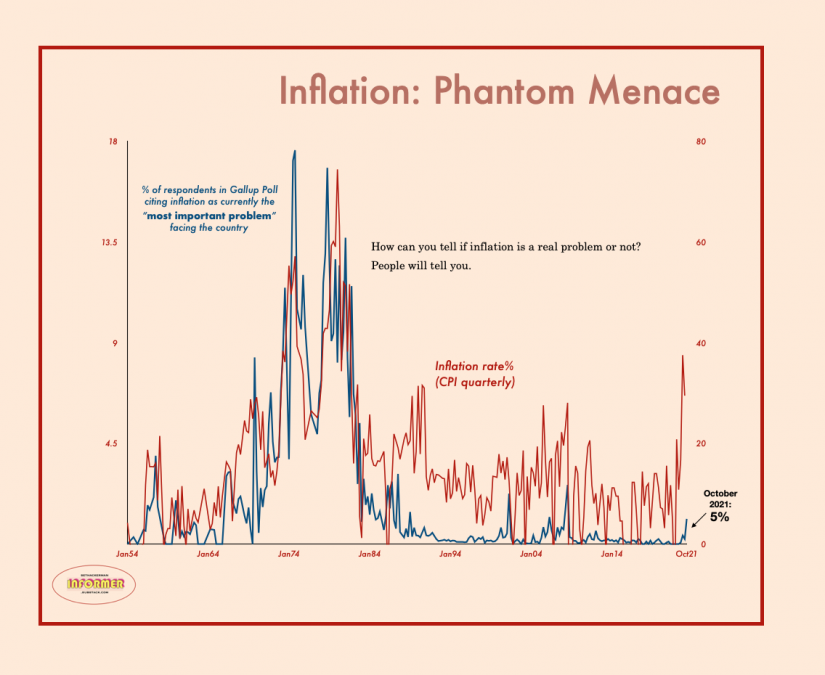 The chart above shows the share of Gallup respondents citing inflation as the most important problem, in all surveys, going back to 1954 — along with the actual inflation rate, as measured by the Consumer Price Index (CPI).

Viewed in long-range perspective, this month’s surge in public concern about inflation brings us back to the dark days of the inflationary crisis of . . . 2008, when, um . . . coffee prices exploded, I think? Something like that. Pretty sure vanilla got expensive, too.

Do you remember that? No? Well, it must have seemed pretty serious at the time, since more people were concerned about inflation back then — from April to September 2008, the percentage citing inflation as the most important problem averaged about 9 percent — than now.

If the public seems barely to notice the current inflation, that probably has something to do with the fact that inflation today is mostly confined to a remarkably small section of the economy. 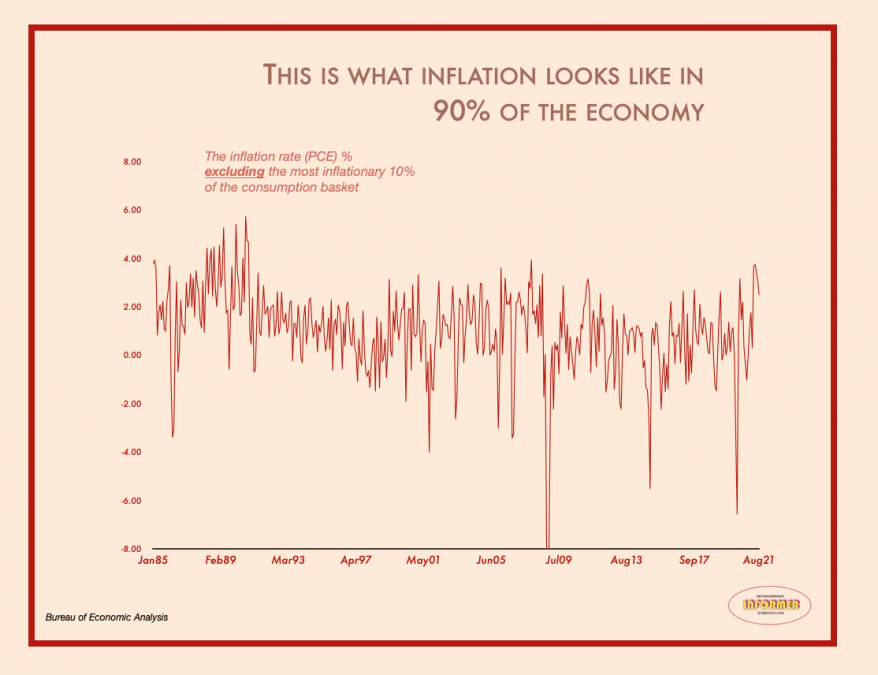 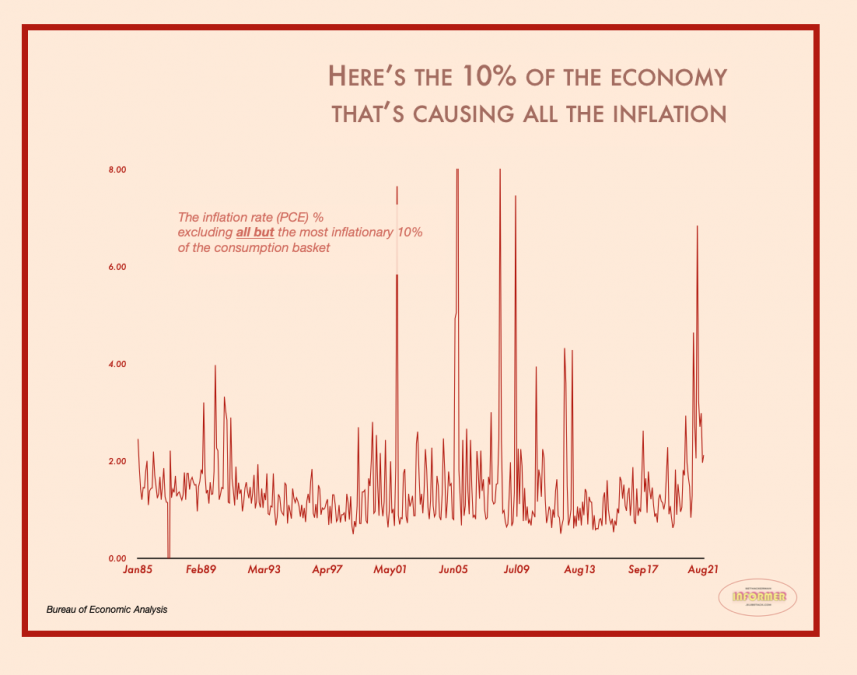 As the Gallup data suggest, when inflation is actually a problem, you will know it — because large numbers of people will tell you so.

Real inflation is insidious. In multiple ways, it can exert a poisonous influence on the fabric of sociopolitical as well as economic life. As Daniel Yankelovich, one of the leading public opinion experts of his day, said in 1979:

For the public today, inflation has the kind of dominance that no other issue has had since World War II. The closest contenders are the cold war fears of the early 1950s and perhaps the last years of the Vietnam war. But inflation exceeded those issues in the breadth of concern it has aroused among Americans. It would be necessary to go back to the 1930s and the Great Depression to find a peacetime issue that had the country so concerned and so distraught. From the public’s point of view, it [seems] an intractable problem.

Inflation that year came in at 11.3 percent.

What we are experiencing today is not serious inflation — not quantitatively; but more importantly, not qualitatively. Moreover, as I’ll explain at length in my next piece, we will not be having serious inflation in the foreseeable future.

Serious inflation, of the kind Yankelovich is referencing in the quote above, was a historical phenomenon from an earlier phase of capitalism. It emerged in the interwar period. Its existence was discovered by the public and the economic profession quite suddenly in the late 1950s. And then, sometime between 1985 and 1995, it ended.

That is, unless the historical conditions that once made it possible were to return.

Until they do, you may find the fact that you’re living through an inflationary crisis frequently slipping your mind, returning to your consciousness only periodically (as it were) — that is, while reading publications like Politico or the Washington Post as they report from the front lines of the inflation struggle (a shifting forward perimeter that forms a salient into the green rooms of the various Sunday morning talk shows).

As a public service, then, here’s an important reminder from our family to yours: don’t forget to worry about inflation!