Democrats’ hopes of an expanded margin in the House and a clear mandate for their presidential candidate were dashed this November. While more fine-grained precinct-level analyses in the future will offer greater precision and nuance, on the whole, our findings suggest that the 2020 presidential election represented a further consolidation of the Democratic Party’s highly educated, high-income suburban coalition at the expense of its traditional base in a multi­racial working class. What follows are some of our key takeaways.

Despite Democrats’ appraisal of themselves as the “pro-diversity, anti–white supremacy” party, Joe Biden’s coalition depended, above all, on affluent, white suburban voters. 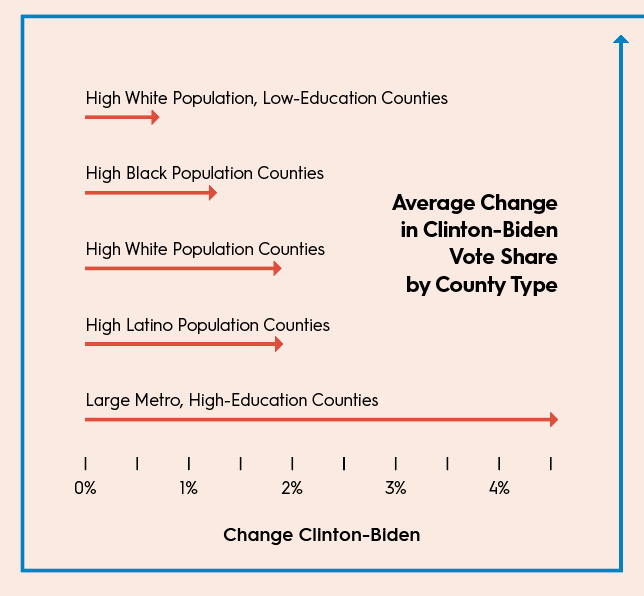 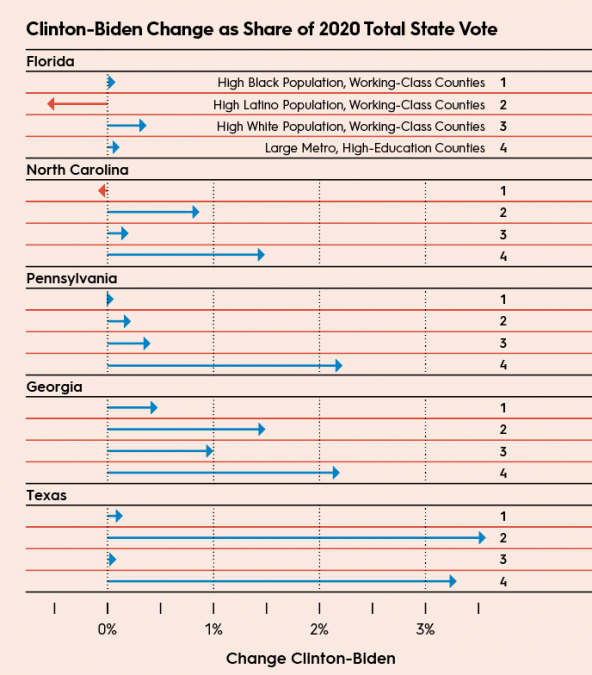 We looked at how much of Biden’s improvement over Clinton in key battleground states came from large metropolitan, high-education counties compared to counties with large populations of white, black, and Latino working-class voters. We found that, in three of the five states examined — Georgia, North Carolina, and Pennsylvania — Biden’s improvement over Clinton depended most heavily on affluent, white suburban counties.

The key exception was in Texas, where Biden’s increase over Clinton accounted for a slightly larger share of the 2020 vote in counties with large Latino populations compared to affluent suburban counties. Biden’s increase over Clinton in counties with large black and white working-class populations accounted for a small percentage of the 2020 vote in all five states. 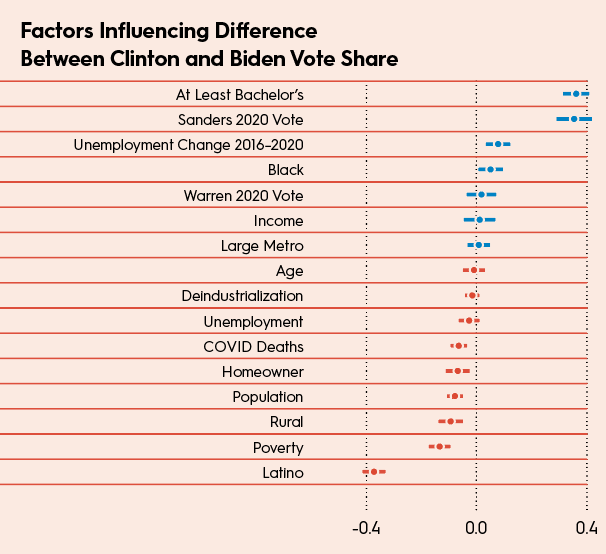 When we account for a range of other factors that might have affected Biden’s improvement over Clinton, we see that education is the strongest positive predictor. We also observe, however, that Biden made advances over Clinton in progressive strongholds (many of which are also high-education counties), such as counties where Bernie Sanders performed well in the 2020 Democratic primaries, and counties that experienced increased unemployment between 2016 and 2020 (these tend to be young, low-poverty, low-homeownership, and relatively urban counties). In other words, Biden did better than Clinton not just in wealthy suburbs, but also in gentrifying urban areas. 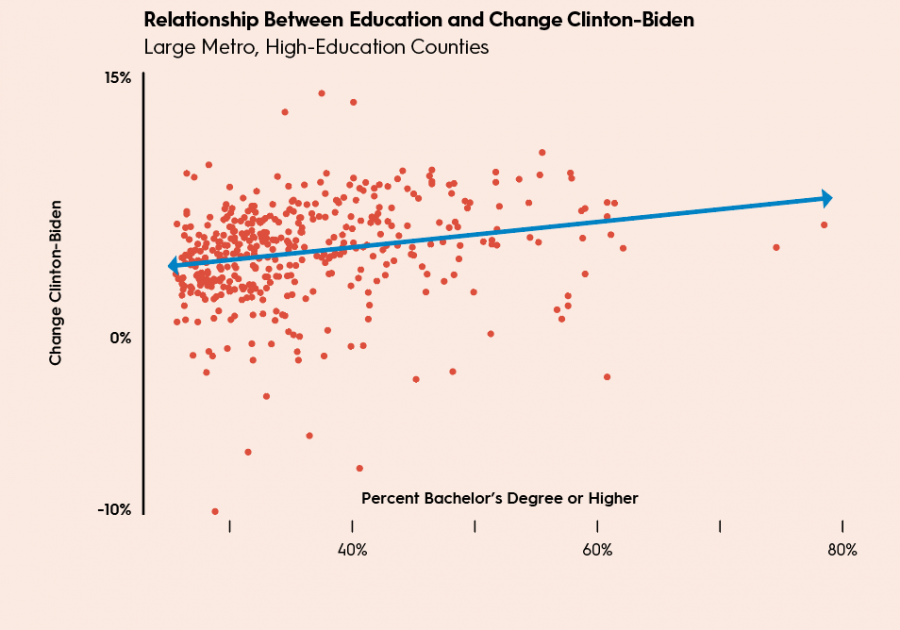 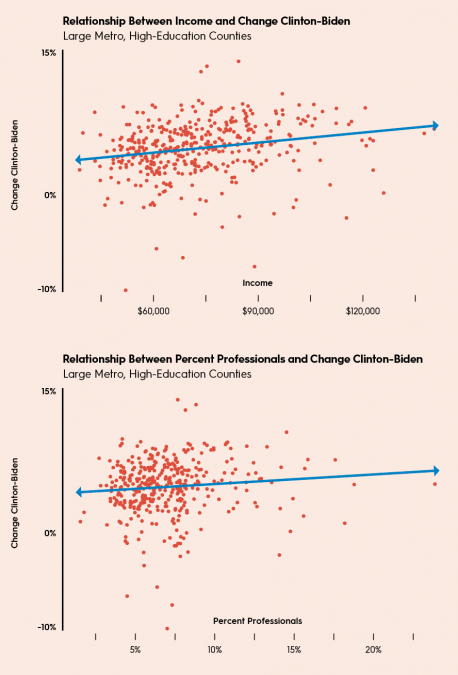 Within large metropolitan areas, Biden did better than Clinton in nearly every county with a large share of professionals in the workforce, an above-average median income, and an above-average level of educational attainment. And his margins over Clinton improve as the share of professionals, high-income individuals, and highly educated individuals grows.

Working-class voters shifted to the right across all racial groups. 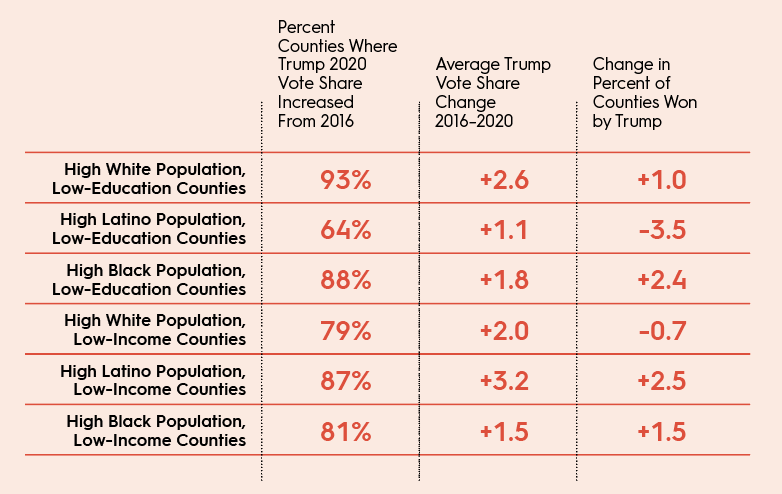 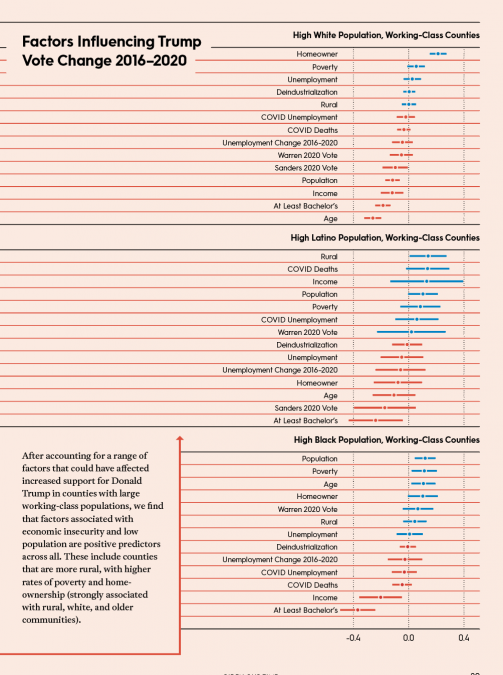 After accounting for a range of factors that could have affected increased support for Donald Trump in counties with large working-class populations, we find that factors associated with economic insecurity and low population are positive predictors across all. These include counties that are more rural, with higher rates of poverty and home­ownership (strongly associated with rural, white, and older communities).

Turnout was up across the board, but weakest in working-class black areas.

We see a similar pattern when we look at changes in turnout rates between 2016 and 2020, with the greatest voter enthusiasm coming from counties with large Latino populations, followed by those with large white and black populations. 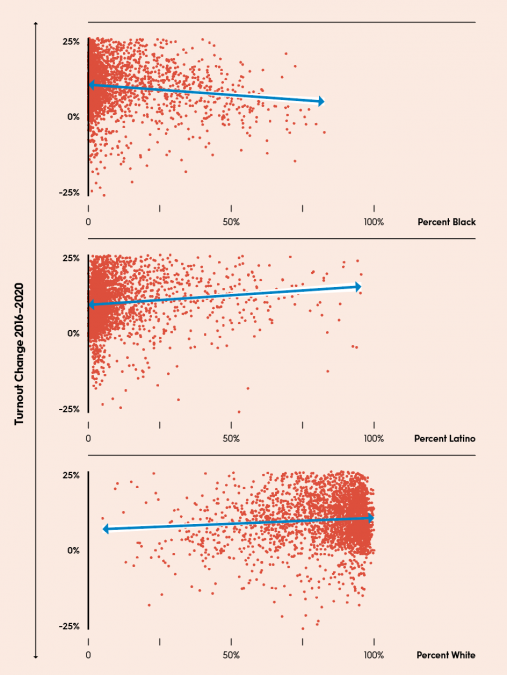 Why do we see such large turnout increases in counties with high Latino populations? Our analysis suggests that this is due to a number of factors, including strong turnout among younger voters, higher-income voters, lower-education voters, and big increases in the South, Southwest, and West. This could also have been the result of targeted efforts by campaigns to mobilize voters in these particular areas. 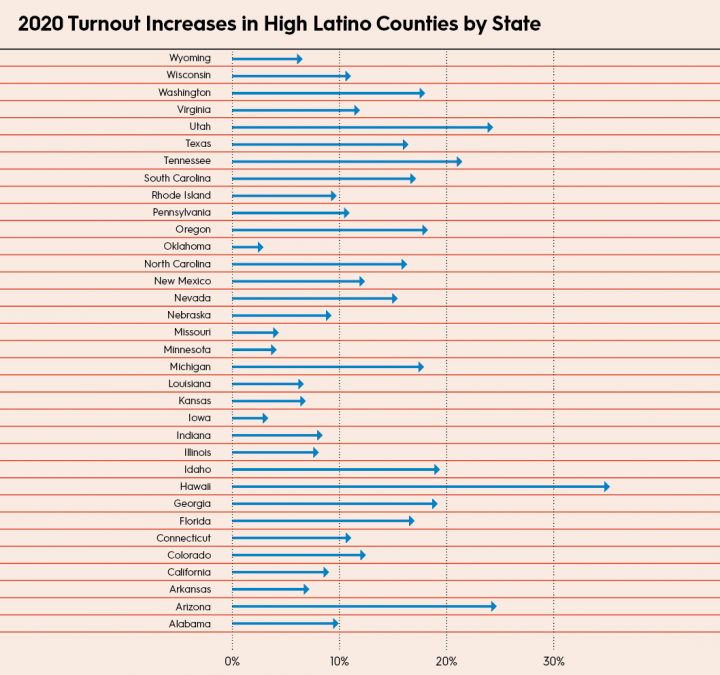 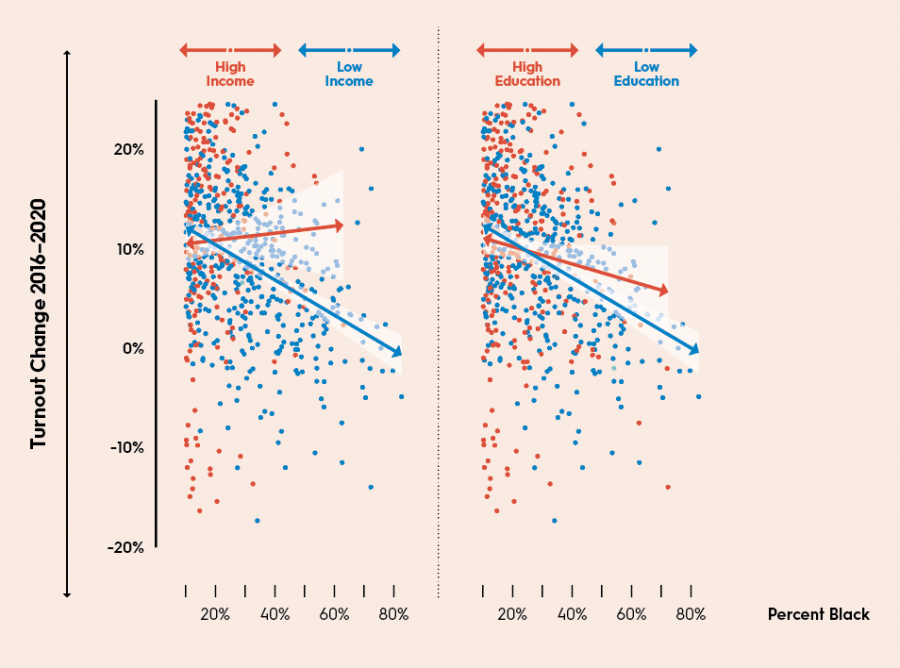 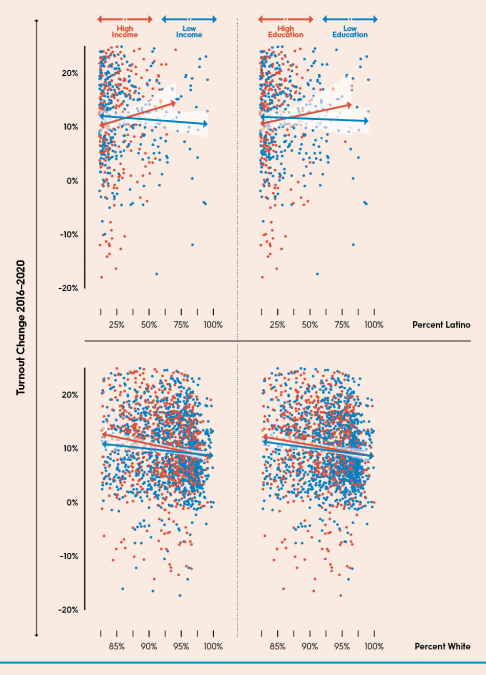 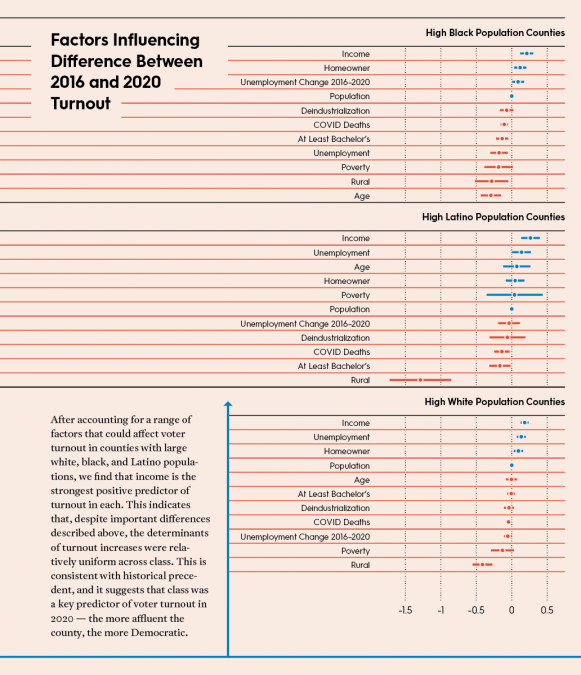 After accounting for a range of factors that could affect voter turnout in counties with large white, black, and Latino populations, we find that income is the strongest positive predictor of turnout in each. This indicates that, despite important differences described above, the determinants of turnout increases were relatively uniform across class. This is consistent with historical precedent, and it suggests that class was a key predictor of voter turnout in 2020 — the more affluent the county, the more Democratic.

To get a sense of the practical significance of these turnout patterns, we calculated the percentage of the 2020 presidential vote that was attributable to turnout increases in key battleground states across county types. 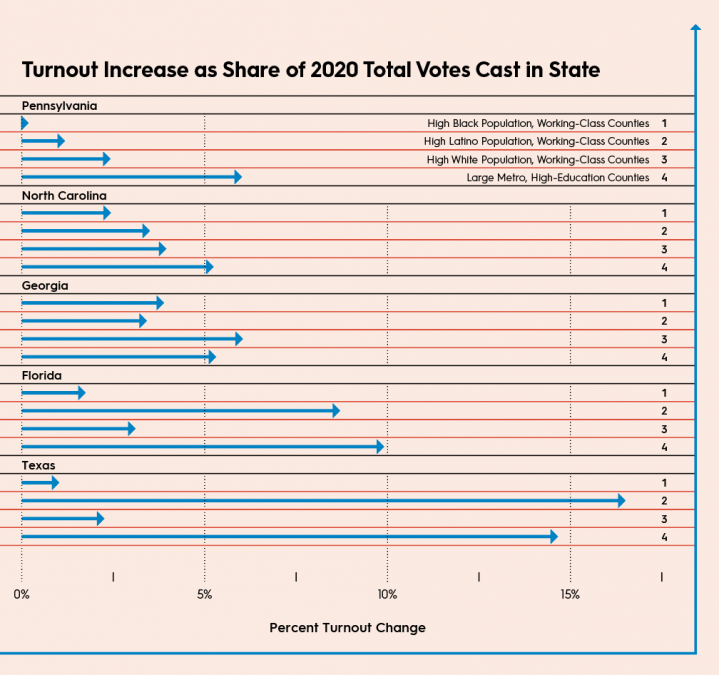