If you have not been pleasantly surprised by the opening moves of the Biden administration, you should be, at least a little bit. One of the most promising areas has been fiscal policy, given the tilt of the incoming Council of Economic Advisers. After all, two of the three nominees to the council, Heather Boushey and Jared Bernstein, have institutional roots in our tribe, economics-wise. The third, professor Cecilia Rouse of Princeton, is more prestigious, but also more conventional. Ironically, as nominated head of CEA, she requires Senate confirmation. In the interim, she cannot serve, and the influence of the two renegades is enhanced in these critical weeks.

The Biden administration is fixing to ram through a $1.9 trillion spending package. In a gratifying change of attitude from the hackneyed “we are not red states or blue states, we are the United States” cant of Barack Obama, nobody this time is falling for the crocodile tears of the Senate Republican minority. The Democrats for all their faults appear to understand that if they do not deliver the goods, after 2022 they risk minority hell in Congress for a very long time. The package will be passed, by hook or crook.

The bleating of the born-again fiscal responsibility gang is being deservedly ignored as well. Still, the question remains, is the price tag for the spending too high or too low? Too low would mean unnecessary delay in recovery of the job market. Too high would mean running the risk of inflation. To get at this, we need to examine the arcane economic concept of the “output gap.”

In simplest, nontechnical terms, for our purposes here the output gap is the difference between gross domestic product at full employment and the existing GDP level. Before going further, we ought to stipulate that our interest in GDP goes beyond its level or its rate of growth. Composition matters, too. Production of Elon Musk’s exploding spaceships adds to GDP. What Sam Bowles called “guard labor” (the execrable ICE, the defundable police) is part of GDP. We could go on.

That aside, the gap is still of crucial importance to the well-being of the working class. High employment puts welcome upward pressure on wages — employers chase workers more than workers chase jobs. That’s the kind of inflation we can get behind.

The underlying question — exactly, or approximately, how do we know if we are at full employment — is the most important, neglected factor in public policy. Nearly eight decades ago, the Polish economist Michał Kalecki explained the reactionary bias against full employment as stemming from the fear of workers’ power. Today, the US Congressional Budget Office — which produces the official forecasts of the economic impact of congressional bills — duly reflects that bias, congenitally understating the potential for employment and GDP growth (and in parallel, overstating projected federal budget deficits).

Is there any truth to the premise that the actual unemployment rate can be “too low” — so low that ruinous inflation is the result? Consider the graph below. 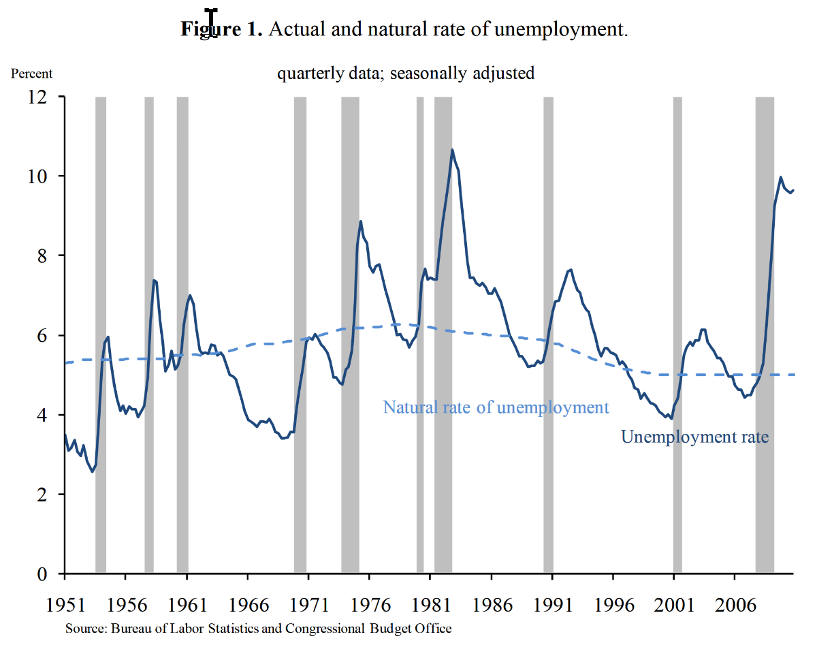 The blue dotted line is the purported natural rate (according to the CBO). The dark solid line is actual unemployment. If the inflation implications of this concept were borne out, we would see inflation pressure when the solid line dips below the dotted line. From the 1980s onward, we see three episodes when unemployment was, by this metric, too damn good. What we never saw was any inflation worth worrying about.

By now, the realization that inflation risks have been overstated is grasped by a wide range of economists, from center to left. The Biden administration is well motivated to “go big” (at least, by conventional standards). They have proposed to spend $1.9 trillion for virus relief, economic stimulus, and public investment.

There is some griping from the sidelines that can be prudently ignored, if not mocked. Larry Summers, former economic adviser to Barack Obama, Bill Clinton — and for those who recall, Michael Dukakis — protests that the Biden plan is too big. Ironically, the publication of his column in the Washington Post attests to Summers’s thankfully waning influence, a fitting denouement to a career as a millstone around the neck of Democratic Party economic policy.

By contrast, Obama economists Jason Furman and Austan Goolsbee have lined up with the White House in support of the $1.9 figure. So, too, has Paul Krugman from his perch at the New York Times.

Economists more to our taste have proposed much bigger numbers. Examples include Mark Paul, Anders Fremstad, and J.W. Mason for the Roosevelt Institute, and Adam Hersh for the Groundwork Collaborative. I commend their work to all.

From a political standpoint, the Biden proposal is both a ceiling and a floor. It is a ceiling in light of the fifty-fifty split in the Senate, and a narrowed Democratic majority in the House. The Democrats’ majority notwithstanding, Senate approval is obstructed by quibbling from barely there Democrats Joe Manchin of West Virginia and Kyrsten Sinema of Arizona.

A vote in the House is more tractable, though there the newly formed “Problem Solvers Caucus” means sand in the gas tank. My expectation is that the two senators can be brought around with some special goodies for their states, and that Rep. Nancy Pelosi will whip her own caucus into shape. So I think we can expect a decent outcome, at least for the short term. I don’t see much eagerness to repeat the Obama tactics of negotiation, delay, and surrender. The dire implications of that route for the midterms are plain. Survival concentrates the mind.

The plan is a floor in the following sense. There is a good chance it will be inadequate, which means an even better chance of no inflationary consequences. This will give advocates another reason to demand more. Secondly, objections to the plan from recalcitrant Democratic incumbents can be used to primary them and to oppose obstreperous Republican incumbents in November of 2022. Agitation of all types will be helpful.

The most interesting budget development is the budding discussion about family allowances, the holy grail of liberal social policy for the past century. A family or child allowance is one type of guaranteed income. In the Biden plan, it takes the form of an expanded child tax credit (CTC) and an expanded Earned Income Tax Credit (EITC). On the Republican side, no less than Senator Mitt Romney, with the assistance of the Niskanen Center, has proposed a plan that compares favorably to the Democrats’.

Both plans provide the full cash benefit even in cases of very low or zero earnings, unlike the EITC or CTC under current law. Both benefits are cash paid out monthly. The willingness of a Republican to suggest unconditional, universal cash payments should be seen as a watershed.

The Biden plan has several drawbacks. One is that it requires claimants to file an income tax return. The IRS is severely underfunded and will have difficulty getting everyone to participate. Two is that taxpayers risk getting “too much” assistance, with the result that they will be faced with an onerous tax bill the following year, requiring them to settle up with the IRS. Three, the Biden bill terminates after one year.

Romney’s bill escapes these problems but adds its own. It provides a larger benefit than the Biden plan, but offsets a good chunk of it with cuts in the earned income tax credit for the sake of “deficit neutrality.” On the positive side, it would be administered by the Social Security Administration and would not require filing for an income tax. There is no potential clawback in the succeeding year’s income tax liability.

Immigrants appear to get short shrift in all of the current proposals, though advocates are working on that. A lot is made of the notion that an income guarantee such as the UBI would have minimal administrative cost because it is received by “everybody.” Less understood is that the government does not have any list of “everybody.” No such list exists. It would be possible to gin one up, but the task is not trivial.

In general, the budget debate is a battle among limited but positive alternatives, a welcome change from where we might have been with a different election outcome. This changes the strategic situation for the Left, as suggested above. Agitation is aimed less at preventing bad things and more at pushing for incremental gains.

More radical change would seem to depend on breaking the back of Trumpism, also known as the Republican Party, and organizing on the ground to expand “the Squad” and shrink the GOP caucuses in Congress. Still, wouldn’t you rather be here, than where you were five months ago?